Across Fading Borders: The Challenges of East-West Migration in the EU 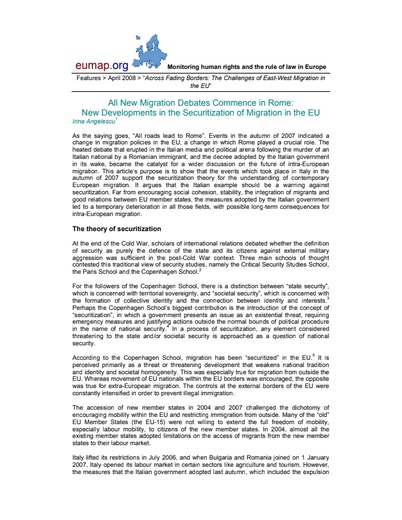 In 2004, the United Kingdom, Ireland, and Sweden were the only countries to fully open their borders; last year, more countries followed suit. During this period, a debate erupted over the impact of East-West migration, and the fate of the immigrants themselves.

The British Office for National Statistics dubbed the influx "the largest single wave of foreign in-movement ever experienced by the UK," and media and research reports have portrayed hardworking employees and grateful employers. However, reports have also called attention to exploited migrants, overwhelmed schools and institutions, and a Far Right eager to capitalize on resentment against the newcomers.

The economies of the countries of origin benefit from the money sent home by those who left, and indirectly from the new skills of returning migrants. But these countries also suffer from the outflow of qualified professionals. In the meantime, some of the new member states are now grappling themselves with their new status as "immigration countries."

The EU Monitoring and Advocacy Program (EUMAP) invited authors to analyze the impact and background of intra-EU mobility and migration, both in the countries of destination and the countries of origin. EUMAP is pleased to present a first set of four papers by independent contributors. A second set of papers will appear in May.

Part 1 consists of a series of four articles, available for download.