Addicted to Punishment: The Disproportionality of Drug Laws in Latin America 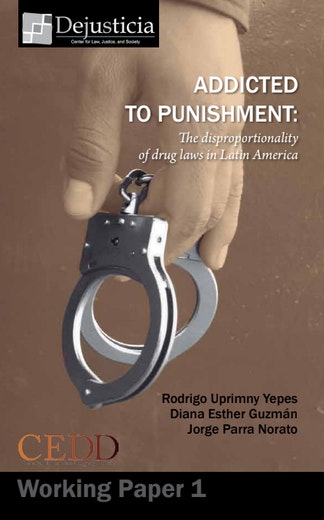 Over the past several decades, Latin America has seen penalties for drug crimes—even low-level selling—skyrocket. In many Latin American countries, nonviolent drug offenses receive significantly longer sentences than many violent crimes such as homicide and rape.

A new study of criminal legislation explores this phenomenon in seven Latin American countries (Brazil, Ecuador, Peru, Mexico, Colombia, Bolivia, and Argentina). The study was conducted by Dejusticia, as part of the Colectivo de Estudios Drogas y Derechos, with support from the Washington Office on Latin America and the Open Society Foundations. It found that penalties for all seven studied countries have increased 521 percent since 1950.

The report reveals that the average maximum sentence for a drug offense rose from 34 years in prison in 1950 to 141 years today and in three of the seven countries surveyed, drug trafficking was subject to longer maximum and minimum penalties than murder.

The report, Addicted to Punishment: The Disproportionality of Drug Laws in Latin America, states: “When comparing murder with drug trafficking, the logical assumption is that penalties for murder must be higher because it results in a concrete harm to a very important protected legal right—human life and personal integrity—while trafficking does not, in and of itself, lead to such a harm.”