Against Her Will: Forced and Coerced Sterilization of Women Worldwide 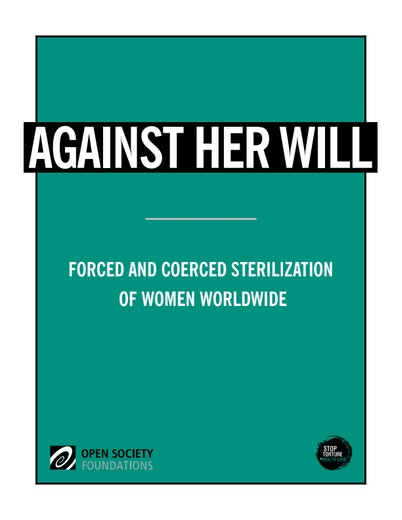 Women worldwide have been forced or coerced by medical personnel to submit to permanent and irreversible sterilization procedures. Despite condemnation from the United Nations, cases of forced and coerced sterilization have been reported in North and South America, Africa, Asia, and Europe. Women who are poor or stigmatized are most likely to be deemed "unworthy" of reproduction. Perpetrators are seldom held accountable and victims rarely obtain justice for this violent abuse of their rights.

Forced and coerced sterilizations are grave violations of medical ethics and can be described as acts of torture and cruel, inhuman, and degrading treatment. Forcefully ending a woman's reproductive capacity may lead to extreme social isolation, family discord or abandonment, fear of medical professionals, and lifelong grief.

This Open Society Foundations fact sheet provides information on instances of forced sterilization of racial and ethnic minorities, poor women, women living with HIV, and women with disabilities. It also provides recommendations for governments, medical professionals, UN agencies, and donors to end the practice of forced and coerced sterilization.