Aspirations and Reality: British Muslims and the Labour Market 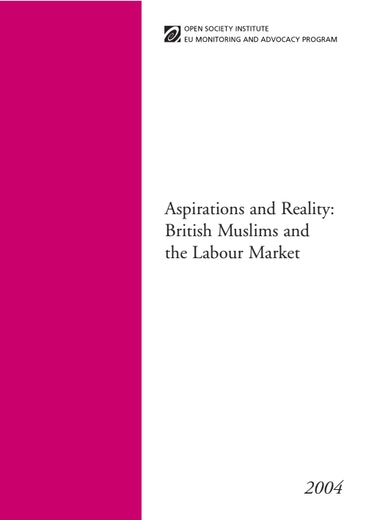 British Muslims face severe obstacles in the United Kingdom's labor market and have a disproportionately high rate of unemployment, according to this report from OSI's EU Monitoring and Advocacy Program (EUMAP).

Aspirations and Reality: British Muslims and the Labour Market calls for more effort to meet the employment aspirations and needs of Muslims in the UK, especially Muslim women and young Muslims. "Government, the private sector, and Muslims themselves must ensure that British Muslims are not left out of the workforce," said the report's author, Zamila Bunglawala, who co-authored the Prime Minister’s Strategy Unit report on Ethnic Minorities and the Labour Market.

British Muslims seeking employment face multiple obstacles, ranging from gaps in mainstream labor market policy and employer practices, poor service delivery and a lack of faith-friendly work environments. The extent to which Muslims face religious discrimination in the labor market is unknown; the report stressed that further analysis is needed to improve the understanding of the British Muslim group as a whole.

Muslim youths are at particular risk of social exclusion. With Muslims set to comprise almost a quarter of the growth in the working age population in Britain between 1999 and 2009, integrating British Muslims into the mainstream labor market must now be a priority for the government, the report concludes.