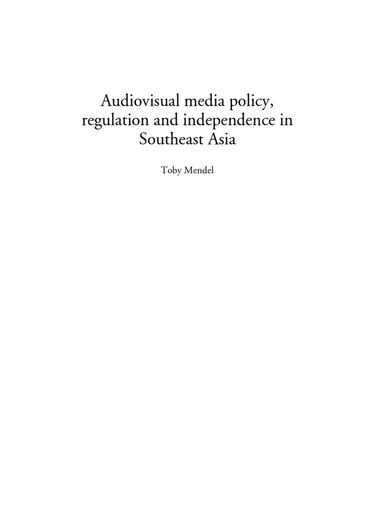 The media systems of Southeast Asia are extraordinarily diverse in terms of professional standards, economic models, political engagement, and technology. They range from Vietnam, where private media are not allowed, to Thailand, where all broadcasters are somehow public in character, to Indonesia and the Philippines, with their vibrant and commercialized broadcast sectors.

Yet these countries also have much in common; there is a regional identity, with many shared experiences and interests.

In this new report, media law analyst Toby Mendel surveys audiovisual media policy and regulation in ten countries of Southeast Asia, assessing them in terms of the degree and quality of independence that they have proven capable of supporting. He concludes that "lack of real political will has stymied audiovisual media reform in all countries in the region since 2000."

He continues: "The way forward is not in doubt: independent regulators need to be given the power to regulate broadcasting under clear public interest rules, with analogous needs for public broadcasters, namely independence and clear public interest mandates. And freedom of the internet should simply be respected." However, Mendel adds, the strategy for achieving these reforms is far from clear.

Mendel’s overview offers an essential tool for everyone concerned with the situation and prospects of media in this strategically significant region. A partner report—on news media production and consumption across Southeast Asia—is also available.

Comedy for a Cause

Jokes for Justice in Latin America

What role can humor play in promoting open society? In this video, Open Society Foundations grantees, staff, and partners explore how comedians and activists in Latin America use comedy to support human rights and democracy.

Building a Citizen-Driven Media for the African Continent

Journalists and entrepreneurs are coming up with new ways to inform and connect their fellow citizens. A novel initiative seeks to bring these innovators together for the benefit of all.