Beyond the Mountains: The Unfinished Business of Haiti 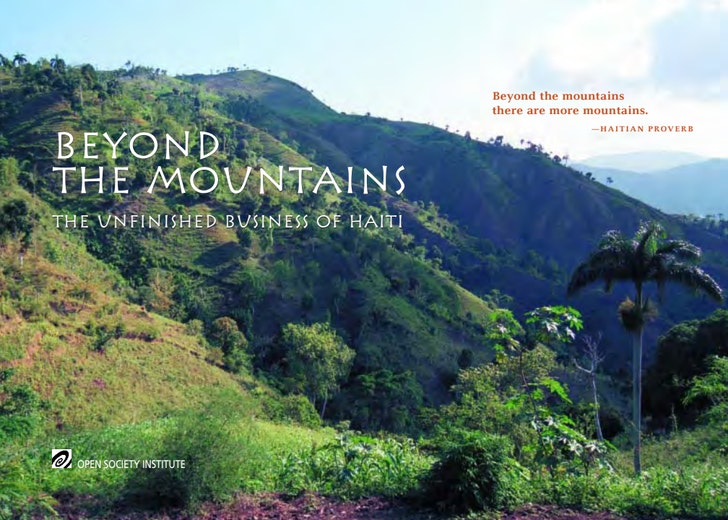 In early 2004, the 200th anniversary of Haiti's independence, violence once again burst into flame as rebel soldiers overran much of the country and forced President Jean-Bertrand Aristide to resign. The country the soldiers fought over is the poorest in the Western Hemisphere, one of the poorest anywhere. Its infrastructure—roads, electricity, water, sanitation—is deteriorating, almost to the point of nonexistence. The schools cannot make a dent in the illiteracy rate. The health care system cannot stop the spread of preventable diseases.

The months of political violence, following years of government repression, have made living conditions worse—at least in the short term. The international community, which reduced its presence in Haiti several years ago in response to the corruption and mismanagement of the government, must now return to help Haiti recover, restore order and stability, and complete the job of establishing truly democratic values and institutions.

The few bright spots in the chaos and dysfunction that have overwhelmed Haiti are a small number of successful civic organizations that desperately need funding to survive and expand. FOKAL, the Soros foundation in Haiti, is a leading force among these grassroots groups. FOKAL stands for the Fondasyon Konesans Ak Libète in Creole (in French, the Fondation Connaissance & Liberté). Its programs improve conditions for young people and rural communities, instilling optimism and hope and a commitment to work for the common good.

Through civic organizations such as the ones described in this report, Haitians are tackling a mountain range of problems. A strong civil society offers the only lasting solution to political repression and violence. This report tells the story of FOKAL and some of the programs that deserve support because they work in a country where so much doesn't. It is a journey through the unfinished business of Haiti.