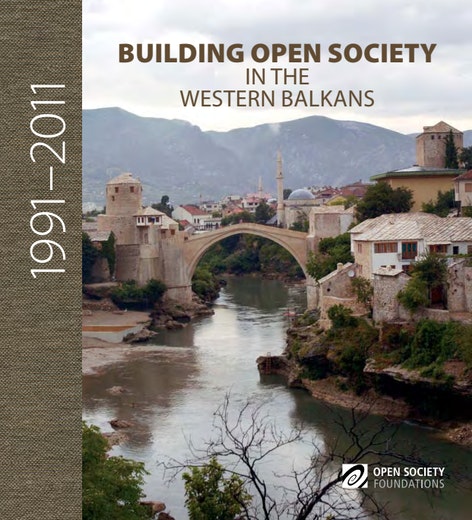 "It is not possible to return to childhood and youth. I cannot resurrect my father or my brother, nor can I go back to a country that does not exist, and not even entirely to that in which I still live. And yet, it all exists, because it is a part of my present identity..."
—Slavenka Drakulić, Sarajevo Notebooks, No. 13, 2006

In June 1991, George Soros founded the Soros Yugoslavia Foundation to undertake reforms in all of the country’s republics. In the following months and years, fighting between various forces in the region increased and the international community expanded its presence to assist civilians and stop war crimes. The Open Society Foundations established foundations in country after country emerging from the violent breakup of Yugoslavia. Twenty years later, as this report shows, there has been progress in strengthening democracy and open society values in the region, but there is still a long way to go.

Building Open Society in the Western Balkans, 1991-2011 documents two decades in the life and times of the region, with an historical overview and foundation activities, and assesses the situation in the crucial areas of humanitarian assistance, citizenship rights, responsibility for war crimes, arts and culture, the international presence, media, and education. The report includes an introduction by George Soros, reminiscences by Open Society scholars Tea Alagić (now a theater director) and Ivan Barbalić (Bosnia and Herzegovina's representative to the UN), excerpts from the magazine Sarajevo Notebooks, and the following essays:

With their latest production, an ambitious theater troupe is challenging homophobia, facing down death threats, and changing minds.

Romeo and Juliet Finds New Life in Serbia and Kosovo

A new production of Romeo and Juliet—performed by actors from Serbia and Kosovo—shows how the arts can foster understanding between cultures.

For Students in the Balkans, an Education in Corruption

For university students in the Balkans, corruption, bribery, and intimidation are all part of the learning experience.