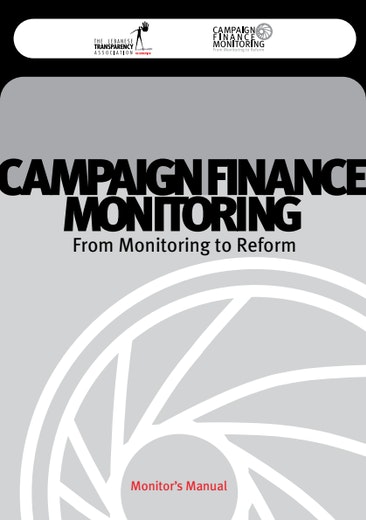 The Lebanese Transparency Association, an Open Society Institute grantee, spearheaded efforts to track campaign financing during the run-up to the June 2009 Lebanese elections.

Since August 2008, the association has recruited and trained 79 monitors to assess the cost of publicity and election offices, interview campaign staff and candidates, and monitor media coverage of the campaign in five daily newspapers. The project also developed and distributed this monitoring manual, Campaign Finance Monitoring in Lebanon. The guide draws on international sources such as the Open Society Justice Initiative's Monitoring Election Campaign Finance handbook, while customizing the material to suit Lebanon's unique political context.

This project does not end with the election. Going forward, the Lebanese Transparency Association will report to the Supervisory Commission on Electoral Campaigns, develop policy recommendations, and campaign to shape campaign finance reforms for future polls. It will also release its findings to the public over the coming months and continue efforts to raise awareness about voter rights. The association is coordinating its project with several local partner organizations.

Established in May 1999, the Lebanese Transparency Association is Transparency International's national chapter in Lebanon. It is the first Lebanese nongovernmental organization aimed at curbing corruption in its various forms and promoting the principles of good governance.