Can Democracy Take Root in Georgia? 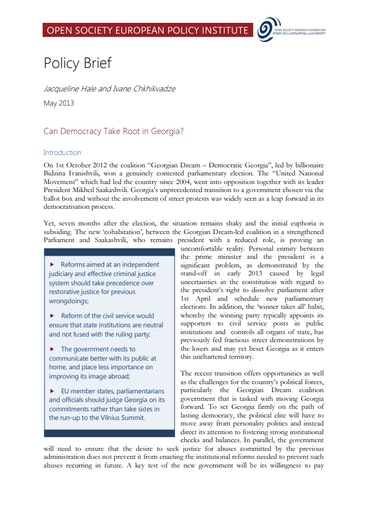 Seven months after a genuinely contested election led to a historic change of government in Georgia, the situation remains precarious. The new “cohabitation” between the Georgian Dream coalition led by Prime Minister Bidzina Ivanishvili in a strengthened parliament and President Mikheil Saakahsvili has weathered constitutional reform but is far from stable. Recent arrests of former high-ranking officials have raised questions. The new government faces the challenge of meeting public demand for accountability for the previous government’s abuse of power while delivering an ambitious legislative reform agenda. Greater openness to civil society and its pro-reform agenda has impressed many impartial observers, but domestic impatience for socio-economic improvement and job creation is growing.

This latest policy brief addresses the challenges in Georgia and for the ruling coalition, and argues that reforms aimed at an independent judiciary and effective criminal justice system should take precedence over restorative justice. It also advocates a constructive approach by government and opposition in enacting lasting reforms to state institutions to ensure that they are neutral and not fused with the ruling party. Although it needs to improve communication with international audiences, the government should place less importance on image-making abroad, but rather more time listening to citizens and delivering on reforms. Finally, in the run-up to the presidential elections in October and the Vilnius Summit in November, EU member states, parliamentarians, and officials should desist from taking sides based on partisan allegiances and judge Georgia on the implementation of its commitments.