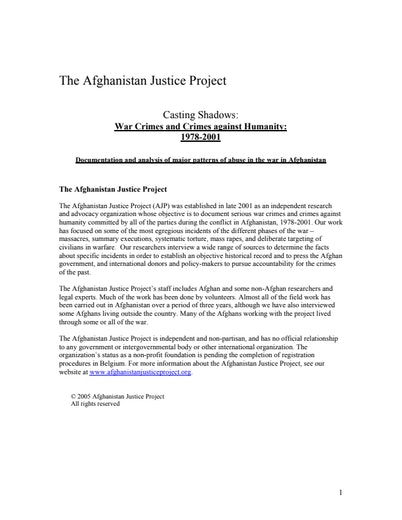 The Afghanistan Justice Project (AJP) has published a report documenting war crimes by political leaders and armed factions during every phase of the war in Afghanistan. Funded by OSI’s Middle East and North Africa Initiative, Casting Shadows: War Crimes and Crimes against Humanity, 1978-2001 is the result of more than three years of field research by AJP.

During every phase of the conflict—the revolution of April 1978 that brought to power the factionalized Marxist-Leninist People’s Democratic Party of Afghanistan, its radical reform measures and brutal crackdown on the uprisings that followed; the Soviet invasion of December 1979, occupation and counterinsurgency war; the Soviet withdrawal and continuing war; interfactional fighting after 1992 and the violent period of “commander rule”; the Taliban’s brutal military campaigns and, finally, the U.S.-led intervention that ended Taliban rule—different armed factions, both Afghan and foreign, committed crimes against humanity and serious war crimes. These crimes have included large-scale massacres, disappearances and summary executions of at least tens of thousands of Afghans, indiscriminate bombing and rocketing that killed hundreds of thousands of civilians, torture, mass rape, and other atrocities. In the twenty-seven years since the war began, there has been no serious effort, international or domestic, to account for these crimes.

In documenting these incidents, the Afghanistan Justice Project sought not to impugn the cause for which any of the armed groups fought, but rather to call for accountability where those actions amounted to war crimes.