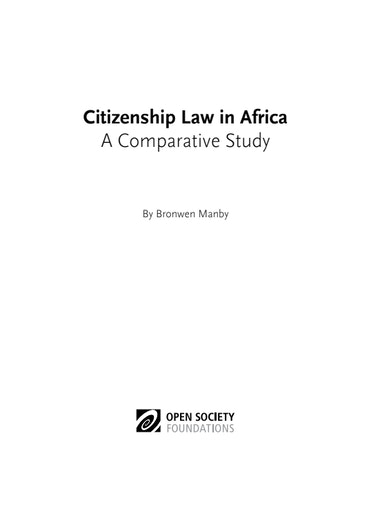 Few African countries provide for an explicit right to a nationality. Laws and practices governing citizenship leave hundreds of thousands of people in Africa without a country to which they belong. Statelessness and discriminatory citizenship practices underlie and exacerbate tensions in many regions of the continent.

Citizenship Law in Africa describes the often arbitrary, discriminatory, and contradictory citizenship laws that exist from state to state, and recommends ways that African countries can bring their citizenship laws in line with global norms.

This is the third edition of this report providing comparative analysis of Africa’s citizenship laws. It is a comprehensive revision of the original text and tables, which are also updated to reflect developments at national and continental levels, including the independence of South Sudan, as well as new guidance on the right to a nationality adopted by the continental human rights institutions.

The report covers topics such as citizenship by descent, citizenship by naturalization, gender discrimination in citizenship law, dual citizenship, and the right to identity documents and passports. It describes how stateless Africans are systematically exposed to human rights abuses: they can neither vote nor stand for public office; they cannot enroll their children in school, travel freely, or own property; they cannot work for the government.

Albinism in Africa In Depth

“We Are Tired of Being Ignored”

Following a brutal murder in Mali, one of Africa’s most celebrated artists helped rally a movement to defend the rights of people with albinism, and organized a defiant musical festival unlike anything the world had ever seen.

People with albinism face marginalization, discrimination, and even violence because of how they look. But according to UN expert Ikponwosa Ero, a global movement for justice is finally gaining traction.

For more than a quarter of a century, the Open Society Foundations have been dedicated to South Africa, proudly supporting its nascent democracy and civil society movements.