Civil Society Voices: How the EU Should Engage Its Eastern Neighbours 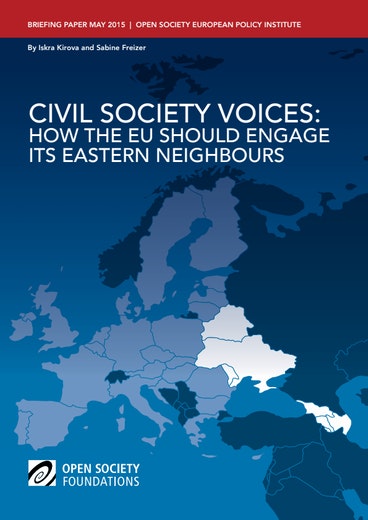 The EU’s “eastern neighbourhood” is an increasingly complicated and contested space. The challenge of Russia’s resurgence and regional elites’ resistance to reform are forcing the EU to reevaluate its policies.

With the launch of its Eastern Partnership six years ago, the EU was ready to offer its neighbors to the east—Armenia, Azerbaijan, Belarus, Georgia, Moldova, and Ukraine—integration into the EU market, mobility of people, and close political ties in exchange for rule of law and democratic and economic reforms. Today, it questions whether this policy has secured its strategic interests and political influence.

The Eastern Partnership reinforced domestic constituencies for change in at least three partners—Georgia, Moldova, and Ukraine—that in 2014 signed association agreements. It has not lost the potential to contribute to democratic processes and support reformers in the other three: Armenia, Azerbaijan, and Belarus. The Eastern Partnership remains the EU’s most effective foreign policy instrument to build accountable and stable institutions and states, and uphold the EU’s commitment to its neighbors’ sovereignty and right to make independent foreign policy choices.

This policy paper—the result of extensive discussions with experts and civil society leaders—highlights local concerns and expectations about the EU’s role in the region and its support for stability and democracy. As the EU rethinks its policies in the area, this paper offers recommendations on how to make the Eastern Partnership more effective and relevant to people, societies, and government, and to secure the EU’s interests in an increasingly polarized and unstable region.

As the EU works on rules to protect worker rights and the planet from corporate harm, Open Society’s Jon Jacoby spoke to Anita Dorett, of the Investor Alliance for Human Rights, about how investors are pushing for change.