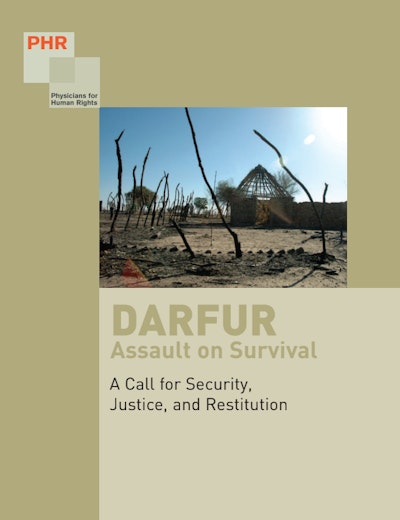 For over two years, the Government of Sudan and their ruthless proxy militias, the Janjaweed, have carried out a systematic campaign of destruction against specific population groups, their way of life and all that sustains them. This report by Open Society Foundations grantee Physicians for Human Rights tells the story of Darfurian lives and livelihoods obliterated in three of the thousands of villages literally wiped off the map by the genocidal killers who also pillaged, plundered, and pursued men, women and children in an all-out assault on the very survival of a population.

By delving deeply into the experiences and accounts of eyewitnesses from the villages of Furawiya, Terbeba, and Bendisi, Physicians for Human Rights is adding to the mounting evidence of war crimes, crimes against humanity, and genocide perpetrated against non-Arab civilians in Darfur. During trips to the region between May 2004 and July 2005, investigators randomly surveyed dozens of survivors and documented—with hundreds of photographic images as well as hand-drawn maps—compelling evidence of a destroyed way of life and means of survival.