The Desegregation of Romani Schools 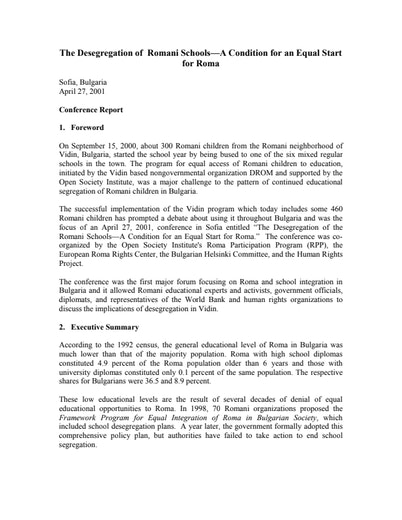 On September 15, 2000, about 300 Romani children from the Romani neighborhood of Vidin, Bulgaria, started the school year by being bused to one of the six mixed regular schools in the town. The program for equal access of Romani children to education, initiated by the Vidin-based nongovernmental organization DROM and supported by the Open Society Institute, was a major challenge to the pattern of continued educational segregation of Romani children in Bulgaria.

The successful implementation of the Vidin program, which today includes some 460 Romani children, has prompted a debate about expanding it throughout Bulgaria. This possibility was the focus of an April 27, 2001 conference in Sofia, Bulgaria entitled "The Desegregation of the Romani Schools—A Condition for an Equal Start for Roma." The conference was co-organized by the Open Society Institute's Roma Participation Program (RPP), the European Roma Rights Center, the Bulgarian Helsinki Committee, and the Human Rights Project.

A conference report is attached.

The Time Is Now

Leaders in the EU are confronted with a dual obligation—to restore healthy environments for Roma, and to do so with the full participation of Roma communities themselves.