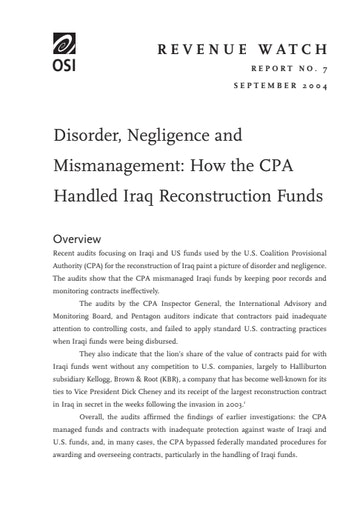 The audits—released in late July by the Coalition Provisional Authority Inspector General (CPA-IG)—paint a picture of disorder and negligence. Contractors made little effort to control costs, while the Coalition Provisional Authority, which was in charge of managing Iraqi reconstruction funds, failed to adhere to federally mandated procedures for awarding and overseeing contracts.

“The CPA did not do its job regarding the oversight of reconstruction funds,” said Svetlana Tsalik, director of the Revenue Watch project. “It failed to stop the misuse and waste of money that belonged to the Iraqi people and American taxpayers.”

The report, the sixth in a series by Iraq Revenue Watch, finds that 60 percent of the value of all contracts paid with Iraqi funds went to Halliburton subsidiary Kellogg, Brown & Root (KBR)—the same company that Pentagon auditors in December 2003 found had overcharged the U.S. government for as much as $61 million for fuel imports into Iraq. A criminal investigation of KBR was launched by the Department of Defense in February 2004.

The CPA-IG audits confirm the findings of previous ones. A report released in July 2004 by the International Advisory and Monitoring Board, the watchdog body set up by the United Nations, found numerous problems in the CPA’s control and use of Iraqi oil assets during the occupation. These include the absence of oil metering to control theft, poor record-keeping on oil sales, an absence of oversight of spending by the Iraqi ministries, the use of noncompetitive bidding procedures for some contracts, and the CPA’s refusal to transmit crucial information to the UN-mandated body.

A recent Pentagon audit of KBR’s billing system, which shows that systematic deficiencies in the company’s accounting and billing procedures incurred significant costs to U.S taxpayers and to Iraqi oil revenues, is further proof of mismanagement.

Following the model of its American predecessor, the Iraq interim government to date has provided scant information about how it is managing Iraq’s oil revenues.