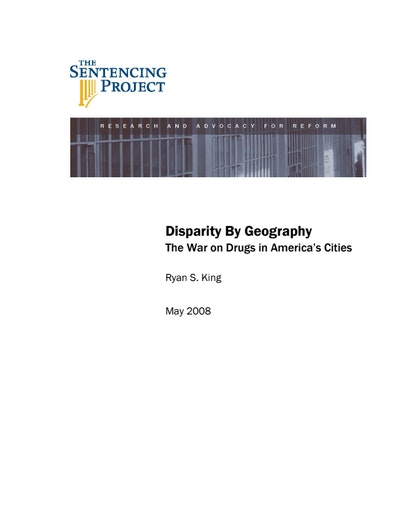 The alarming increase in drug arrests, concentrated among African-Americans, beginning in the 1980s raises fundamental questions about fairness and justice in the United States. It is especially troubling that these trends come not as the result of higher rates of drug use by African-Americans, but instead the decisions by local officials about where to pursue drug enforcement.

This report documents this aspect of the "War on Drugs" and calls for a new approach to dealing with problems of substance abuse, both within and outside the criminal justice system. It argues for the need to shift the overall allocation of drug control funding to emphasize prevention and treatment rather than expanded incarceration. The report calls on local officials to reconsider policies of large-scale drug arrests and to move toward encouraging partnerships between law enforcement and social service providers in order to provide a broader range of options for people needing assistance.

Founded in 1986 to provide defense lawyers with sentencing advocacy training and to reduce the reliance on incarceration, The Sentencing Project is a national non-profit organization working for a fair and effective criminal justice system by promoting reforms in sentencing law and practice, and alternatives to incarceration. The Sentencing Project has become a leader in the effort to bring national attention to disturbing trends and inequities in the criminal justice system with a successful formula that includes the publication of groundbreaking research, aggressive media campaigns and strategic advocacy for policy reform.

We Must Not Forget the Children of the Incarcerated

As a new report shows, draconian anti-drug policies in Latin America don’t just harm people who use or sell substances; they harm the children and families of the incarcerated, too. Thankfully, there’s a better way.