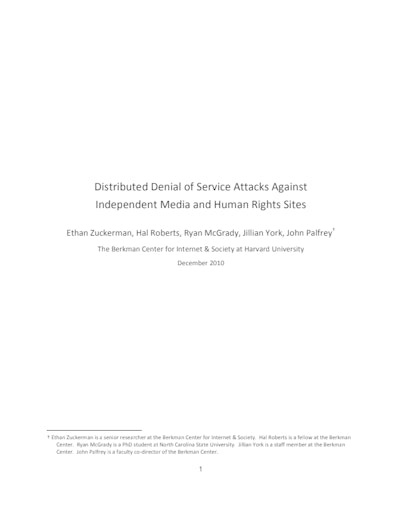 This study funded by the Open Society Foundations highlights the growing threat of cyberattacks against independent media and human rights websites. The research finds that targets can do little to prevent such attacks, and should focus instead on mitigating harm.

The internet is a crucial tool for independent media and human rights organizations to communicate their message and their mission to the world, and to shed light on issues mainstream media would rather ignore. But the internet also provides a new set of tools for those who would suppress speech: hacking attacks on an organization's technical infrastructure such as Distributed Denial of Service, or DDoS, attacks.

Distributed Denial of Service Attacks Against Independent Media and Human Rights Sites, a report published by the Berkman Center for Internet and Society, is the result of research sponsored by the Open Society Foundations.

The research sought both to understand the ways in which DDoS attacks are used to suppress speech, and to make initial recommendations to independent media and human rights organizations to fend off such attacks.

Comedy for a Cause

Jokes for Justice in Latin America

What role can humor play in promoting open society? In this video, Open Society Foundations grantees, staff, and partners explore how comedians and activists in Latin America use comedy to support human rights and democracy.