Education at Risk in the Northern Caucasus 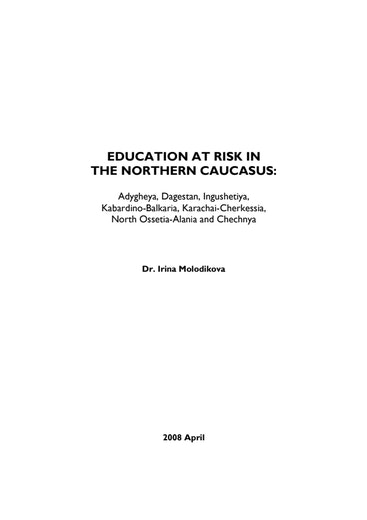 In April 2008, the Education Support Program published the study Education at Risk in the Northern Caucasus: Adygheya, Dagestan, Ingushetiya, Kabardino-Balkaria, Karachai-Cherkessia, North Ossetia-Alania and Chechnya as part of the Caucasus Education Initiative.

This study aims to identify specific groups of at-risk children and examine factors hindering their full participation in education in the Northern Caucasus republics. The study draws on the quantitative and qualitative data from a variety of information sources, including existing statistical data, document analysis, and interviews with education experts (principals of schools, local authorities, officials, and NGO activists), and focus groups of teachers both in rural and urban areas.

The study was funded by the Education Support Program and written by Dr. Irina Molodikova, a research fellow at Central European University (Budapest) and Director of the Social Inequality and Exclusion seminar program for OSI's RESeT program.