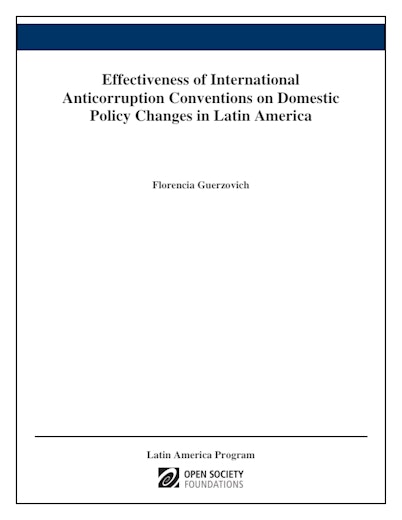 This study evaluates the effectiveness of Transparency International Latin America and Caribbean Department (TI-LAC) Conventions Program’s strategy. This strategy tries to generate a dynamic stimulus for the effective implementation of the Inter-American Convention against Corruption and the United Nations’ Convention against Corruption in the Americas. Over the last five years, the Program has mainly worked to consolidate civil society organizations’ position in the Inter-American System as an interlocutor able to support the implementation of the IACC and participate in its peer review mechanism.  More recently, the Program has supported selected national-level advocacy activities that could have greater impact at the national level.

TI-LAC’s Conventions’ Program has received funding from the Open Society Foundations’ Latin America Program since 2004.  In the last five years, it has invested approximately $686,000.  The notion underlying our support has been that international anticorruption conventions and peer review mechanisms are important elements of a transnational anticorruption strategy that can empower national-level accountability constituencies/civil society groups and, in so doing, activate anticorruption policies in domestic systems. Anticorruption institutions and advocacy, in turn, are concrete ways to promote open society values.

Q&A: Watching the Watchers during a Pandemic

With states around the world embracing surveillance technology against COVID-19, civil society groups must step up to ensure that individual rights and anticorruption laws are not sacrificed for the sake of an easy fix.

An Iraq for All Iraqis

Protests in Iraq over corruption and joblessness are about more than the current’s failures. They are the expression of a rising generation’s desire to move beyond a spoils system based on ethnicity and sect.

“We’re More, and We’re Not Afraid”

It’s been two years since Hurricane Maria devastated Puerto Rico. In the time since, historic protests have forced a hated governor from office—inaugurating a new era of reform and political mobilization.