Empowerment through Employment: Capitalizing on the Economic Opportunities of Roma Inclusion 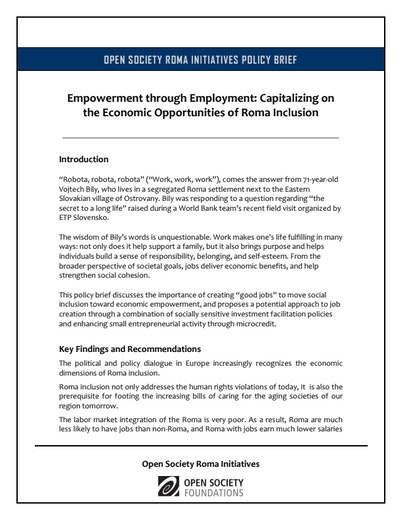 This policy brief discusses the importance of creating “good jobs” to move Roma social inclusion toward economic empowerment, and proposes a potential approach to job creation through a combination of socially sensitive investment facilitation policies and enhancing small entrepreneurial activity through microcredit.

The political and policy dialogue in Europe increasingly recognizes the economic dimensions of Roma inclusion.  Roma inclusion not only addresses the human rights violations of today, it  is also the prerequisite for footing the increasing bills of caring for the aging societies of our region tomorrow.

Currently, the labor market integration of the Roma is very poor. As a result, Roma are much less likely to have jobs than non-Roma, and Roma with jobs earn much lower salaries than non-Roma. And while other segments of the region’s population are aging rapidly, the Roma population is comparatively young and growing.

This brief argues that if more Roma were employed and more of them had higher earnings, the tax revenue generated by Roma workers could help pay for the rising health care costs of the increasingly older general population. In addition to its potential impact on public health care, the lack of social inclusion and jobs for Roma has a significant impact on other areas of the economy as well.

However, the brief explains, a distinction must be made between “good jobs” for the individual and “good jobs” for society.  Public works, designed to simply increase employment rates and without any longer-term economic or productivity goals, are rarely good jobs for society.

The brief also examines the role of microcredit and its role in enhancing small-scale entrepreneurial activity, long considered an important component of poverty alleviation efforts. The brief references a recent World Bank / UNDP household survey found that in the marginalized Roma communities of Eastern Europe, microcredit has a very limited role in facilitating self-employment, primarily because Roma entrepreneurs generally lack collateral, are indebted, and have a lower level of education than the average person from the general population.