Equal Opportunities for Women and Men 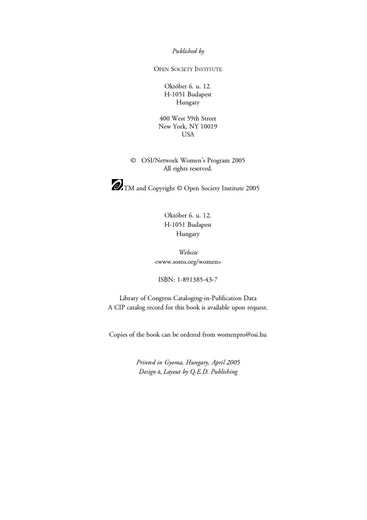 Gender equality is still far from being a reality in Central and Eastern Europe, according to the report Equal Opportunities for Women and Men: Monitoring Law and Practice in New Member States and Accession Countries of the European Union, published by OSI's Network Women's Program.

The findings and recommendations in Equal Opportunities for Women and Men are based on monitoring conducted by national gender equality experts and local NGO representatives in Bulgaria, the Czech Republic, Estonia, Hungary, Lithuania, Poland, Romania, Slovakia, and Turkey.

The report describes existing national institutional mechanisms, policies, and programs on gender equality, and highlights several shortcomings. The research identified a general lack of awareness among men and women about how gender inequality affects their daily lives as well as a lack of political will to enforce existing national and EU gender equality policies.

The report's key recommendations include a call for governments to establish regular monitoring of how equal pay principles are practiced in both the public and private sectors and making these monitoring results public; they urge the governments in Bulgaria, Hungary, and Poland to adopt official gender equality strategies; and appeal to all governments to collect gender disaggregated statistical data, without which gender equality policies can hardly be successful.

A report overview, as well as reports for individual countries, are available for download.