Evaluating the Implementation of the EU Race Equality Directive 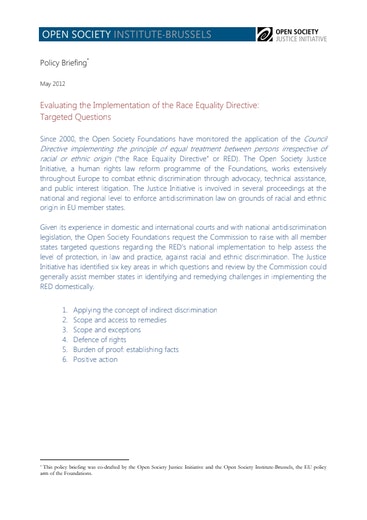 In May 2012, the Open Society Foundations submitted to the European Commission in Brussels this policy briefing paper on the state of implementation of the European Union’s Race Equality Directive [pdf]. The directive, enacted in 2000, is aimed at eliminating racial and ethnic discrimination in law and practice across the EU’s 27 member states.

Drawing on its work monitoring and combatting ethnic discrimination across Europe, the Foundations urged the commission to work with member states to improve implementation of the directive in several important areas.

Those areas are: the concrete judicial application of the concept of indirect discrimination; reviewing the scope of judicial remedies; exceptions provided to antidiscrimination legislation by national law; access to the effective defence of rights; rules on sharing the burden of proof; and positive actions initiated by member states to remedy racial discrimination.