Footprint of Financial Crisis in the Media 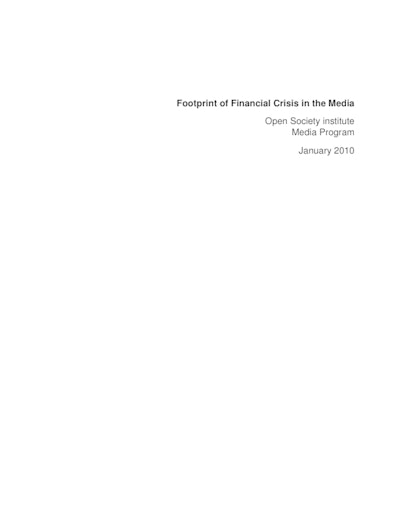 This Open Society study explores the impact of the financial crisis on media and news delivery to citizens in 18 countries of Central and Eastern Europe and the Commonwealth of Independent States.

The global economic downturn has affected countless businesses across the region, forcing them to slash costs, lay off employees, and reduce output. Media businesses are no exception. However, when media businesses are hit, it is not just their turnover that suffers: their primary function, the delivery of news to citizens, feels the impact too.

The study looks at media performance in 2009 compared with the previous three years, explores the cost-saving measures taken by significant news carriers, and the effects of these measures on output, breadth and depth of coverage, scope of investigative reporting, and opportunities for open public debate.

The regional overview and individual country reports are available for download.