Freedom of the Press, Expression, and Information in Spain 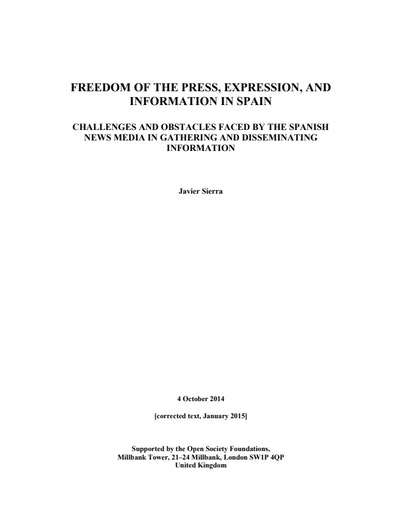 According to surveys, the most distrusted professions in Spain are politics, the judiciary, and journalism. Leaving judges aside, the reasons for this distrust are linked: to remain solvent, most traditional media rely heavily on “poderes fácticos”—economic and financial groups that control or influence politicians and the media.

Austerity has only sharpened this reliance. At the same time, governing parties in parliament control appointments to public service broadcasters. These broadcasters live under the constant threat of cuts to their budgets. Media ownership is opaque, and so is the scale and pattern of public money spent on media advertising.

The impact of all these factors has been debilitating for the Spanish media. A report by the Madrid Press Association found that 77 percent of journalists rated their independence as poor or very poor, and 56 percent had been pressured to modify stories.

The Program on Independent Journalism has commissioned two experts to examine this crisis. In a major report titled Freedom of the Press, Expression, and Information in Spain (La Libertad de Prensa, Expresión e Información en España), Javier Sierra examines the history of media freedom and freedom of information in Spain. He identifies the major obstacles to independent journalism and emphasizes the urgent need for legal reform in line with international standards.

For the Spanish Media, Death by a Thousand Paper Cuts

Hobbled by crushing debt and exploited by politicians, the press in Spain is barely breathing. Can a coalition of civil society groups bring it back to life?

A Victory for Workers

Why Uber’s Loss Is a Win for Labor Rights

Thanks to a recent ruling from the United Kingdom’s highest court, Uber will now be recognized as what it has always been—an employer. This marks a significant step forward for workers’ rights in the gig economy.