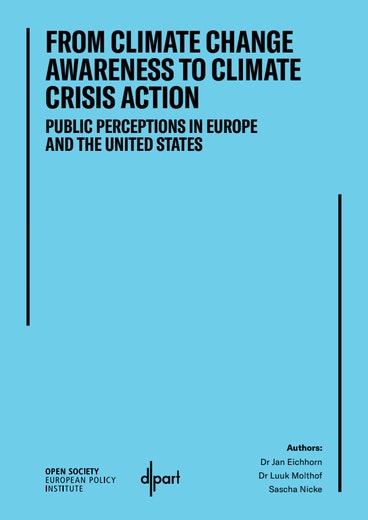 This report charts attitudes on the existence, causes, and impact of climate change in Germany, France, Italy, Spain, Sweden, Poland, Czech Republic, the United Kingdom, and the United States. It also examines public attitudes to a series of policies that the EU and national governments could harness to reduce the damage inflicted by human-made emissions.

Although a clear majority of European and United States respondents are aware that the climate is warming, and that it is likely to have negative impacts for humankind, this report finds there is confusion about the scientific consensus on climate change. This, the report argues, has created a gap between public awareness and climate science, leaving the public underestimating the urgency of the crisis, and failing to appreciate the scale of the action required.

Addressing the climate crisis demands that we examine how our economies are organized. Yet, research shows that people in Europe and the United States fail to see climate policy as intrinsic to economic decision-making.

Although 97 percent of active publishing climate scientists agree that humans have caused recent global warming, a new report finds significant minorities—and, in some countries, majorities—are unaware of this consensus.

Ukraine’s grain helps feed the world. But Russia’s invasion has blocked their path to market, contributing to global famine.