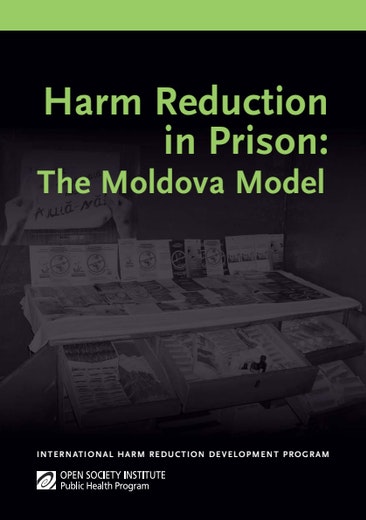 Prevalence of HIV infection among prisoners in many countries is significantly higher than in the general population. Hepatitis C virus prevalence is even higher. Though most prisoners living with HIV contract their infection prior to imprisonment, the risk of being infected in prison, specifically through the sharing of contaminated injecting equipment, is high.

Even countries that have invested heavily in drug demand and drug supply reduction efforts in prisons have not been able to stop injecting drug use. Outbreaks of HIV infection caused by sharing injection equipment in prisons demonstrate how rapidly HIV can spread in detention settings unless effective action is taken to prevent transmission.

An increasing number of countries have introduced HIV programs in prisons since the early 1990s. However, many of these programs exclude necessary interventions such as needle exchange and methadone treatment. Not so in Moldova, whose experience with introducing and expanding a comprehensive HIV program, including such interventions, is described in this report.

Produced by the Open Society Institute International Harm Reduction Development Program, Harm Reduction in Prison is available for download in English and Russian.

Mónica Esparza’s case is one of the most notorious cases of extreme gender violence carried out by Mexican authorities. What her story teaches about how to combat the country’s scourge of gender-based violence.

Fighting the Pandemic in Pakistan’s Prisons

Thanks to the heroic efforts of civil society groups, prisoners in Pakistan did not suffer a mass outbreak of COVID-19. What the near miss underlined, however, is the country’s urgent need for criminal justice reform.