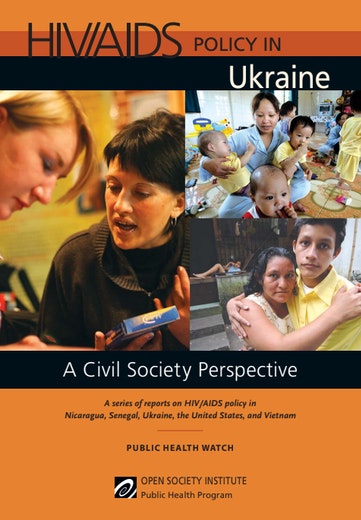 Ukraine has the highest prevalence of HIV/AIDS and the fastest-growing AIDS epidemic in Europe. Injecting drug use continues to drive the epidemic; approximately 70 percent of annual new HIV infections are directly or indirectly attributable to drug use. There are alarming signs that the AIDS epidemic is spreading to Ukraine's general population through sexual contact. From 1997 to 2005, the percentage of new cases resulting from heterosexual transmission tripled—from 11 to 34 percent.

The Public Health Watch report HIV/AIDS Policy in Ukraine: A Civil Society Perspective reveals that despite national political leaders' declared commitment to control HIV/AIDS and to protect the rights of people living with HIV/AIDS, the government's efforts have not been wholly successful.

The lack of administrative capacity and coordination across ministries is a major hurdle in implementing HIV/AIDS programs. For example, the persecution of drug users by law enforcement agents complicates the delivery of prevention, treatment services, and harm reduction measures such as needle-exchange programs and substitution therapy.

The failure to distribute donor funds and provide sufficient funding for HIV/AIDS programs is an obstacle. In April 2006, the World Bank announced that it would suspend a $60-million project to stop the spread of HIV and tuberculosis due to the government’s failure to distribute funds and implement programs. (The suspension was lifted in November 2006.) Despite considerable support from donors, there are significant gaps in resources. Because the policy-formulation process does not take budgets into account, many proposed HIV/AIDS programs are little more than items on "wish lists."

Finally, efforts to control HIV/AIDS are also compromised by frequent violations of human rights. HIV tests are often administered without consent, particularly in TB hospitals and drug clinics. People living with HIV/AIDS are often denied or dismissed from their employment, are refused care, or receive substandard care in health care settings. HIV-positive pregnant women are pressured by medical personnel to abort their pregnancies. Former drug users who are HIV-positive frequently experience discrimination by police, including confiscation of antiretroviral drugs at the time of arrest, forcing them to interrupt treatment.

The Public Health Watch report offers several recommendations to the government to respond to the HIV/AIDS epidemic more comprehensively and effectively, including by significantly expanding involvement of civil society in planning, implementing, and monitoring HIV/AIDS programs; and by ensuring equal access to prevention, treatment, care, and support services for members of marginalized populations.

The complete report is available for download, in English and in Ukrainian.