Human Rights Abuses in the Name of Drug Treatment: Reports from the Field 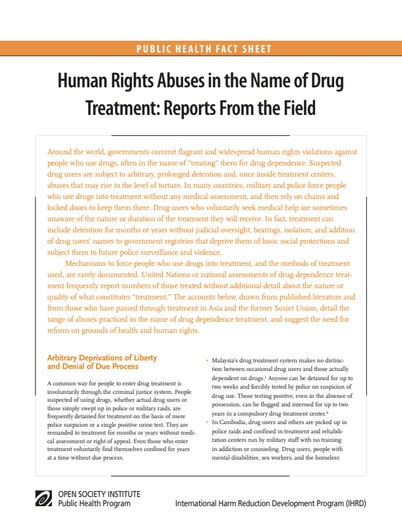 Around the world, governments commit flagrant and widespread human rights violations against people who use drugs, often in the name of "treating" them for drug dependence. Suspected drug users are subject to arbitrary, prolonged detention and—once inside treatment centers—abuses that may rise to the level of torture. Drug users who voluntarily seek medical help are sometimes unaware of the nature or duration of the treatment they will receive. In fact, treatment can include detention for months or years without judicial oversight, beatings, isolation, and addition of drug users’ names to government registries that deprive them of basic social protections and subject them to future police surveillance and violence.

The accounts in this fact sheet, drawn from published literature and interviews with people who have passed through treatment in Asia and the former Soviet Union, detail the range of abuses practiced in the name of drug dependence treatment, and suggest the need for reform on grounds of health and human rights.