Ideas for an Open Society: From Abu Ghraib to America 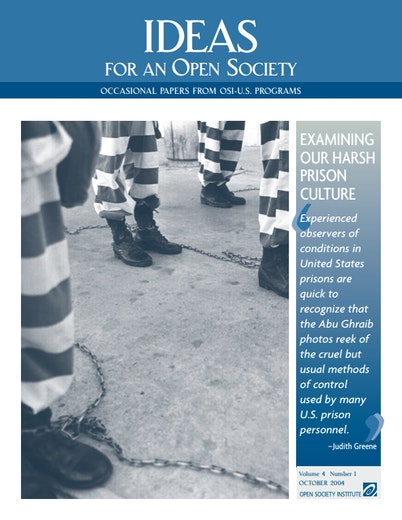 Since the infamous photos of abuses at Abu Ghraib prison in Iraq first came to light, much has been said about the role that the U.S. military and CIA have played in connection with the human rights violations. But reports of similar abuse in the United States are all too common, which suggests that America's dehumanizing prison culture has now been exported elsewhere in the world.

In the October 2004 issue of Ideas for an Open Society, Judith Greene, a Soros Justice Fellow and criminal justice policy analyst, points out specific instances of abuse in U.S. prisons and jails—deaths resulting from excessive force, degrading and humiliating strip searches, inadequate and sometimes rotten food, and denial of medications, medical care, and mental health treatment.

Greene also explores how the Iraqi prison was "restored to operation by Lane McCotter, a U.S. prison consultant handpicked by the U.S. Department of Justice for the job," although he had "resigned as director of the Utah Department of Corrections amid controversy following the death of a mentally ill man who had been strapped in a restraint chair for sixteen hours."

"Experienced observers of conditions in U.S. prisons are quick to recognize that the Abu Ghraib photos reek of the cruel but usual methods of control used by many U.S. prison personnel," Greene writes. "Our vengeful penal philosophy and harsh prison culture has led to a dreadful level of brutality and human rights abuses in our own prisons, and now this maliciously punitive mentality has been exported to Iraq by U.S. prison personnel."

Greene also offers recommendations for improving prison conditions but says what is ultimately needed is "a thorough overhaul of the harsh sentencing laws and policies that have driven the prison system to this unmanageable scale."

Fighting the Pandemic in Pakistan’s Prisons

Thanks to the heroic efforts of civil society groups, prisoners in Pakistan did not suffer a mass outbreak of COVID-19. What the near miss underlined, however, is the country’s urgent need for criminal justice reform.