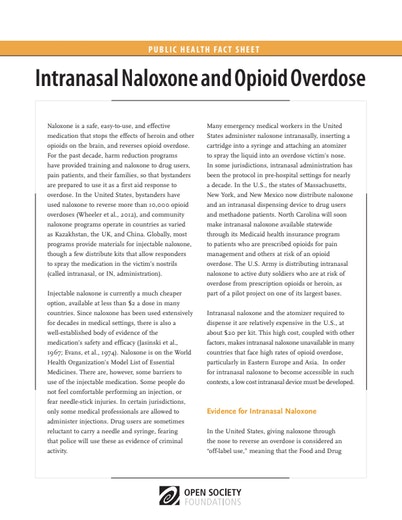 Naloxone is a safe, easy-to-use, and effective medication that stops the effects of heroin and other opioids on the brain, and reverses opioid overdose. For the past decade, harm reduction programs have provided training and naloxone to drug users and pain patients, as well as their families, so that bystanders are prepared to use it as a first aid response to overdose.

In the United States, bystanders have used naloxone to reverse more than 10,000 opioid overdoses, and community naloxone programs operate in countries as varied as Kazakhstan, the UK, and China. Globally, most programs provide materials for injectable naloxone, though a few distribute kits that allow responders to spray the medication in the victim’s nostrils (called intranasal naloxone).

This fact sheet by the Open Society Foundations provides evidence on the effectiveness of intranasal naloxone for reversing opioid overdose, and suggests improvements for overdose prevention programs. It also calls for increased access to naloxone.

The Consequences of Rising Female Incarceration Rates in Latin America

Punitive drug laws are the driving force behind women’s imprisonment, but two organizations are working together to reverse the trend.