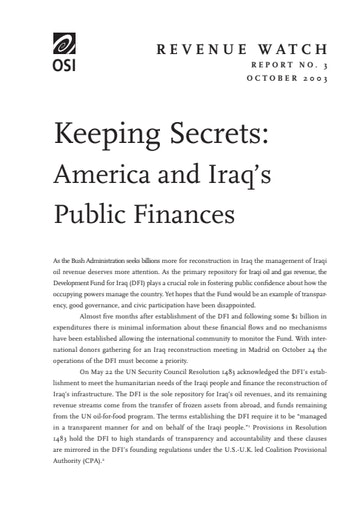 The report was released on the eve of an international donors’ conference for Iraq in Madrid, scheduled for October 23–24. It calls for greater transparency in the management of the Development Fund for Iraq (DFI), the central repository for U.S. reconstruction assistance as well as Iraqi oil and gas revenues. The Coalition Provisional Authority (CPA)—the U.S.-established governing agency in Iraq—has delayed the establishment of a crucial oversight body and refused to disclose basic information about large purchase contracts and DFI expenditures, the report says.

Keeping Secrets calls on the CPA to reverse these trends and offers a set of recommendations, including increased Iraqi involvement in the DFI, more substantial oversight authority for the United Nations’ International Advisory and Monitoring Board, and better public access to information.