The League of Arab States: Human Rights Standards and Mechanisms 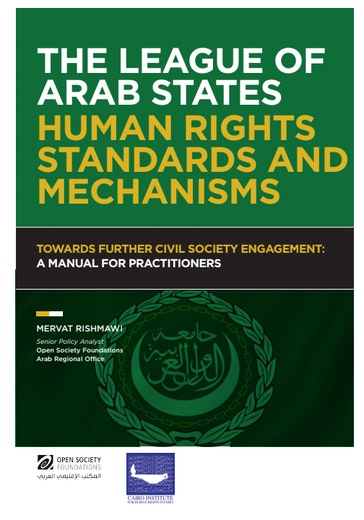 With the Arab region in a state of flux, the League of Arab States seems poised to play a much-needed role on issues such as peace, security, and human rights in Arab countries. Until now, this role has been far from consistent or guided by a genuine human rights agenda. However, a closer look at the Arab League during the recent crises in the region reveals a slow shift in its positioning, highlighting the importance for civil society to engage with the Arab League and influence policies and reform in the region.

Interest in the work of the Arab League is not new to civil society in the region. Civil society organizations have, for example, engaged very closely with the process of revising the Arab Charter on Human Rights. They have also worked with the League on the Darfur and Syria crises. However, this engagement has been fragmented, and at times not driven by a clear strategy. Therefore, this engagement and its impact can be strengthened through effective strategies and mechanisms. It is, therefore, paramount that the Arab League reform its relationship with civil society, and at the same time for civil society to improve its own relationship with the Arab League. The ultimate goal is better protection of human rights in Arab countries.

This manual has been produced with these challenges and opportunities in mind. It aims at providing information to activists in the civil society movement, especially those working in the human rights field, on the structures, standards, and mechanisms of the Arab League relating to human rights. Better understanding of these issues can only contribute to better engagement with the Arab League, and therefore the ability to influence and reform the organization.

Can the Arab League Be Civil Society’s Partner for Human Rights?

To take on a more ambitious role that responds to Arab peoples’ aspirations for more rights and liberties, the Arab League and civil society need to deepen their relations.

Gender-based violence spiked globally during the pandemic. In the Middle East and North Africa, feminist groups stepped up to aid women under threat.