License to Be Yourself: Responding to National Security and Identity Fraud Arguments 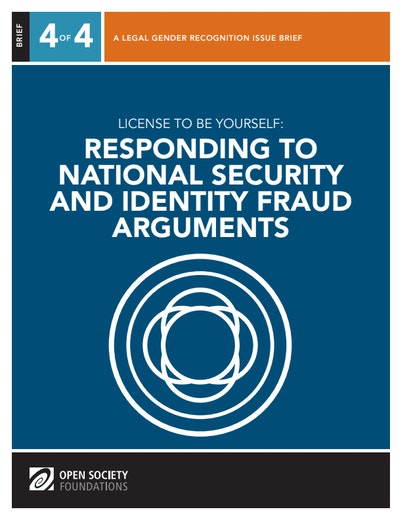 In much of the world, trans and intersex people struggle to obtain official identity documents that acknowledge their appropriate names and sex or gender markers. When people are forced to rely on documents that do not match their gender identity, they risk being subjected to harassment and discrimination.

In addition, they may be suspected of identity fraud and trigger security alerts because of the discrepancy between their documents and their gender identity or appearance. The lack of appropriate documentation is particularly dangerous in situations where a trans or intersex person is crossing a border and being unable to prove their identity can result in being detained or deported.

This brief counters concerns that progressive gender recognition laws and policies will undermine national security and increase the risk of identity fraud. It is the fourth of four resources for activists that accompany Open Society’s 2014 report on legal gender recognition across the world, License to Be Yourself.

License to Be Yourself

Trans people cannot easily change their gender identity on official documents in most counties. This report examines best laws and policies around the world, and successful advocacy strategies.

Gender Identity Recognition at the Border and Beyond

Activists in the United States and elsewhere are mobilizing to ensure trans and intersex people’s rights are protected while traveling abroad—when they are particularly vulnerable.