Losing the Vote: The Impact of Felony Disenfranchisement Laws in the United States 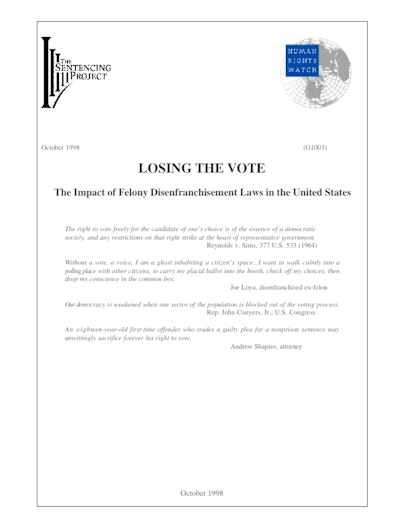 The expansion of suffrage to all sectors of the population is one of the United States' most important political triumphs. Once the privilege of wealthy white men, the vote is now a basic right held as well by the poor and working classes, racial minorities, women, and young adults. Today, all mentally competent adults have the right to vote with only one exception: convicted criminal offenders. In forty-six states and the District of Columbia, criminal disenfranchisement laws deny the vote to all convicted adults in prison. Thirty-two states also disenfranchise felons on parole; twenty-nine disenfranchise those on probation. And, due to laws that may be unique in the world, in fourteen states even ex-offenders who have fully served their sentences remain barred for life from voting.

While felony disenfranchisement laws should be of concern in any democracy, the scale of their impact in the United States is unparalleled: an estimated 3.9 million U.S. citizens are disenfranchised, including over one million who have fully completed their sentences. That so many people are disenfranchised is an unintended consequence of harsh criminal justice policies that have increased the number of people sent to prison and the length of their sentences, despite a falling crime rate.