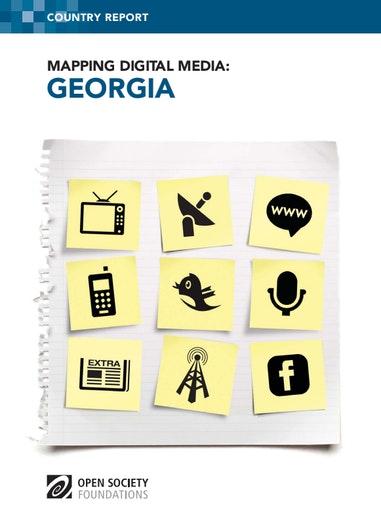 Digitization in Georgia has two speeds: there are plentiful examples of the swift adoption and innovative use of digital media, but just as abundant is the evidence of procrastination and reluctance to embrace new opportunities. It also presents two faces: a free and dynamic online environment and a heavily government controlled offline world. These contradictions have a direct impact on the overall news offer and on media consumption patterns.

This report finds that the momentous change in ownership transparency regulation and the dynamic and free online environment are the most notable success stories since 2005. Yet these achievements are overshadowed by the lack of independence of the broadcasting regulator and the public broadcaster, as well as the slow pace of digital transition.

In order to promote positive change, three kinds of reform need to be undertaken. First, the process of drafting the legal framework for digital switch-over must be made transparent and show results in the near future if the country is to be ready for the transition before the switch-off date in 2015. The public interest provisions, must-carry rules, and transparent spectrum allocation and gatekeeping should be given priority. Second, with public awareness of the purpose and implications of switch-over virtually non-existent, an information campaign and public debate need to start without delay.

Finally, the independence of two key institutions, the Georgian National Communications Commission and the Georgian Public Broadcaster, needs to be strengthened.  In both cases, this can be done by adopting clearer regulatory safeguards against government interference, enforcing transparency, and ensuring civil society participation in selection procedures.