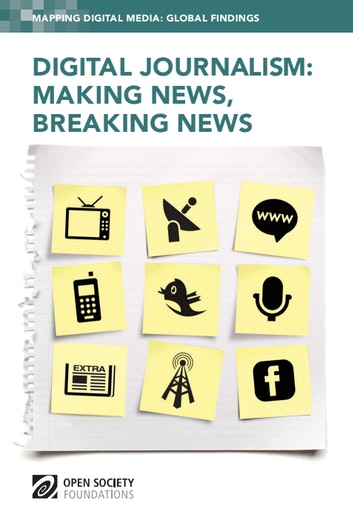 The Mapping Digital Media project examines the global opportunities and risks created by new and digital media. Covering 56 countries, the project assesses how these changes affect the core democratic service that any media system should provide—news about political, economic, and social affairs—and how they can help advance open society values.

Is a world where there are almost as many mobile phones as people, more than half the globe can access digital TV signals, and almost 3 billion people are online a better place for journalism?

The Global Findings of the Mapping Digital Media project assess these and other forces affecting digital media and independent journalism worldwide. Researched and written by a team of local experts, the 56 country reports, from which these Global Findings are drawn, examine the communication and media environments in 15 of the world’s 20 most populous countries, covering more than 4.5 billion of the world’s population, and in 16 of the world’s 20 largest economies.

The Mapping Digital Media research confirms that digital television and the internet have had a radical impact on media businesses, journalists, and citizens at large. As might be expected, platforms distributing journalism have proliferated, media companies are revamping their operations, and citizens have access to a cornucopia of news and information sources.

Other findings were less foreseeable: digitization has brought no pressure to reform state broadcasters, less than one-third of countries found that digital media have helped to expand the social impact of investigative journalism, and digitization has not significantly affected total news diversity.

The Global Findings reveal other common themes across the world:

The 16 chapters in this report provide a unique survey of thematic and geographical trends, and provide new insight into how the information and communications revolution is shaping the new landscape of media and journalism.