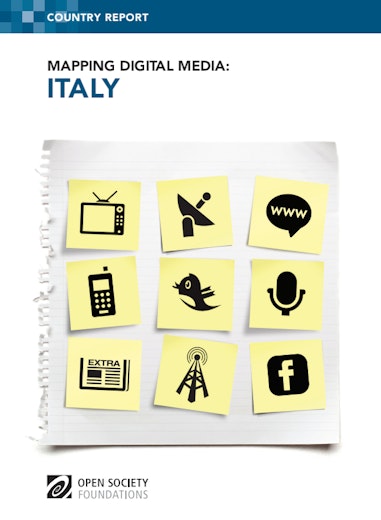 Digital terrestrial television was introduced in Italy in 2001. The switch-off of analog broadcasting started in 2009 and is based on the progressive “digitization” of regional areas. The deadline for the definitive switch-over from analog to digital broadcasting is set for December 31, 2012.

The television set remains the most common media device in Italian households. National television news and traditional newspapers are the media sources most used by Italians to obtain news about politics and daily events. However, the percentage of Italians whose sole source of information was television decreased from 46.6 to 26.4 percent between 2006 and 2009. Newspaper sales have been in long-term decline, fueling concerns over whether professional journalism is financially sustainable in the long term.

Digitization appears to be weakening local broadcasters, who have played an important role historically in safeguarding freedom of information. The multiplication of the national channels, especially RAI and Mediaset, has caused an important decrease in terms of audience and advertising income of local and regional broadcasters.

This report calls on civil society, NGOs, and international organizations to urge the reform of legislation on conflicts of interest between political/institutional roles on one hand and media ownership on the other, as well as to monitor the last stage of digital switch-over, the final allocation of the digital spectrum, and the resulting state of media pluralism, in order to verify that parliament and government actions do not privilege the existing RAI-Mediaset duopoly or favor companies close to the prime minister.