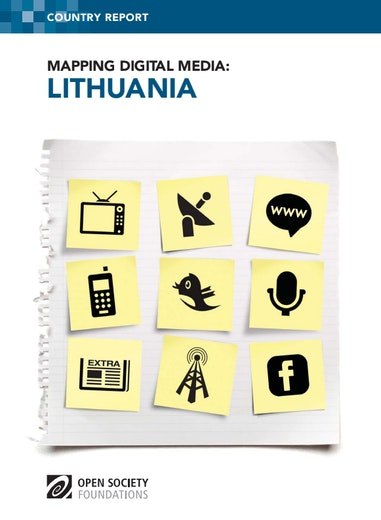 The explosion of digital media and their impact on journalism and democracy in Lithuania coincided with the country's second decade of independence and with the economic crisis of 2009-2010. With the rapid growth of internet penetration, websites dedicated to news appeared and traditional media went online. The near-doubling of internet subscriptions from 34.3 percent of the population in 2005 to 60.5 percent in 2010 was accompanied by dynamic growth in ownership of PCs, laptops, mobile phones, and later smart phones. The internet took on an increasing role as a news source for the public, especially younger audiences.

Formerly marginalized groups, such as ethnic and sexual minorities, have gained a platform on the internet which they were almost entirely denied in mainstream media.

Also, politicians have taken up communicating through new media; some have begun blogging, while others are active on social networks. Government transparency and civic engagement in politics have been enhanced by a range of online tools and initiatives by civil society groups which let voters access and analyze government data, and occasionally generate mainstream media coverage.

However, there are no separate regulations or legal liability provisions concerning internet content that differ from those which apply to other media. Media regulation is in practice independent from government, but the regulators are lax in exercising their powers, e.g. to enforce ownership transparency rules. A weakness of the regulatory system is its dispersion among several bodies which don’t always coordinate among themselves. Their composition raises questions about competence and impartiality.

This report calls for the creation of a single regulatory body with robust appointment criteria as well as for clear and transparent rules for allocating EU funds to the media. It recommends that the government introduce legislation restricting media concentration and intensify efforts to ensure universal public access to media after switch-over.