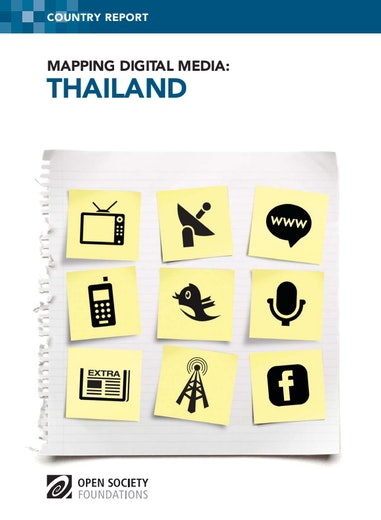 The Mapping Digital Media project examines the global opportunities and risks created by the transition from traditional to digital media. Covering 60 countries, the project explores how these changes affect the core democratic function of any media system: providing the public with news about political, economic, and social affairs.

The dawn of the digital age in Thailand has ushered in the most promising development in Thai media for more than a generation: the establishment of an independent public service broadcaster. However, because of political complications, there has been no plan for the digitization of terrestrial television or orderly spectrum allocation. Thailand still doesn’t have a full roll-out of 3G services.

The most negative development in Thailand’s embrace of digitization has been the authorities' use of the Computer-Related Crime Act of 2007. The government combines the act with draconian libel laws and a 2010 State of Emergency Decree to silence critics and shut down or control TV and radio stations, newspapers, and the internet. The government justifies this interference by claiming that media cannot regulate themselves. Given this context, there is an urgent need for professional media bodies to improve their function as self-regulatory mechanisms by strengthening their codes of conduct and streamlining their complaint processes.

As the media are increasingly used as propaganda machines by politicians and politically-motivated groups, media literacy needs to be promoted at every level of society. In particular, audiences should be encouraged to consume and compare information from diverse sources. Public media literacy should also be increased by supporting and publicizing media monitoring activities by experts and civil society organizations.