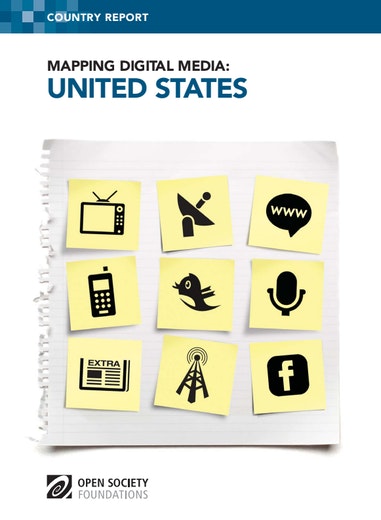 The media environment in the United States is undergoing a significant transition. Terrestrial, over-the-air television has shrunk to less than 15 percent of households, due to consumers’ embrace of pay-TV services including cable, satellite. Broadcast network news from ABC, CBS and NBC that once commanded an overwhelming share of the television audience each lost between one and two million viewers over the past five years, as part of an overall decline in audience size of almost 20 percent since 2005. Traditional print newspapers daily circulation fell by over 31 percent between 2003 and 2009.

While local and national television channels remain the most used news sources, the internet is now the third most popular platform for daily news after local and national television. More than 25 percent of adults in the United States now commonly access the internet via cell phones and personal digital assistants (PDAs), and some 33 percent of cell phone internet users check news regularly on their devices.

The digital transition has also created new opportunities for innovative forms of investigative journalism while undermining the economic foundation that has supported traditional producers of investigative and local public accountability journalism. The net effect remains unclear.

In this context, this report calls for policies to promote greater media diversity and protect and promote the public’s voice through the enforcement of open internet rules, the allocation of spectrum to unlicensed and other innovative uses, an expansion of the universal service fund to broadband, and the broadening of entities that can receive it. In order to strengthen commercial media, the newly proposed public interest obligation reporting rules need to be implemented. Increased public and philanthropic funding for both public and community media is needed. In today’s political context, many of these recommendations are a tall order. However, all are necessary if the United States is to develop the diverse media that will support democracy and the information needs of its communities.

Panelists examine the role that digital media can play in the development and strengthening of democratic societies.

Net neutrality is far more than an arcane technical discussion: the internet’s potential to spur democracy, innovation, and freedom of expression may be at stake.