License to Be Yourself: Marriage and Forced Divorce 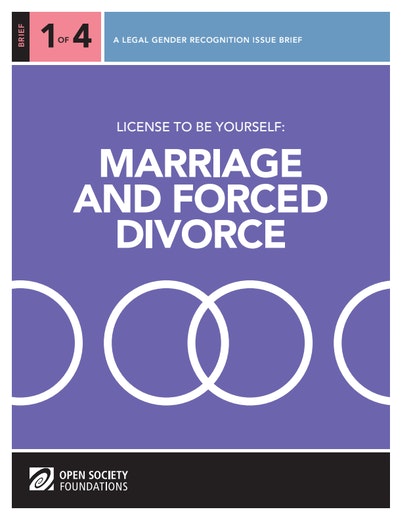 This brief explains legal restrictions that affect the recognition of married trans and intersex people. It examines case law and addresses key arguments made by those who oppose such recognition. It is the first of four resources for activists that accompany Open Society’s 2014 report on legal gender recognition across the world, License to Be Yourself.

License to Be Yourself

Trans people cannot easily change their gender identity on official documents in most counties. This report examines best laws and policies around the world, and successful advocacy strategies.

Gender Identity Recognition at the Border and Beyond

Activists in the United States and elsewhere are mobilizing to ensure trans and intersex people’s rights are protected while traveling abroad—when they are particularly vulnerable.