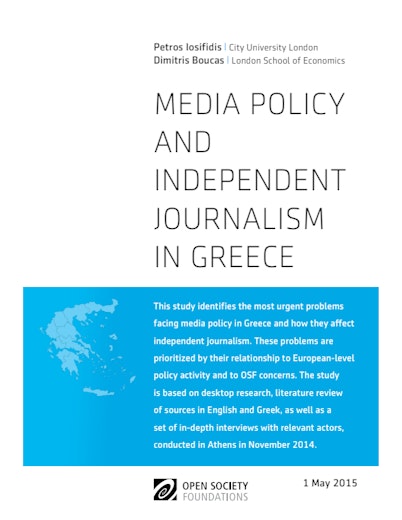 Today, Greece is the European Union member state where journalism and the media face their most acute crisis. This study identifies the urgent problems facing media policy in Greece and how they affect independent journalism.

Since the 1980s and ’90s, deregulation has increased the viewing choices for audiences in Greece. At the same time, the legal and regulatory framework has helped concentrate ownership of press, television, and radio outlets. Private channels operate with temporary licenses and independent regulatory authorities function superficially and ambivalently. As a result, the market has been dominated by a handful of powerful newspaper interests, which have  expanded into audiovisual and online media. Recent laws have further liberalized media ownership and cross-ownership.

Media Policy and Independent Journalism in Greece, based partly on in-depth interviews with key actors, explores these issues and more in this six-chapter report.

Over decades, Open Society’s funding for palliative care has improved access globally. However, while philanthropy plays a large role in this sector, palliative care must ultimately be publicly funded and universally available.

Elections Alone Are Not Enough: Could Citizens’ Assemblies Save Democracy in Germany?

Elections alone are not enough. If you want to safeguard democracy in Germany, you have to change it.