Memorandum: Violations of EU Law and Fundamental Rights by Bulgaria’s Discriminatory Treatment of Roma in the Area of Housing 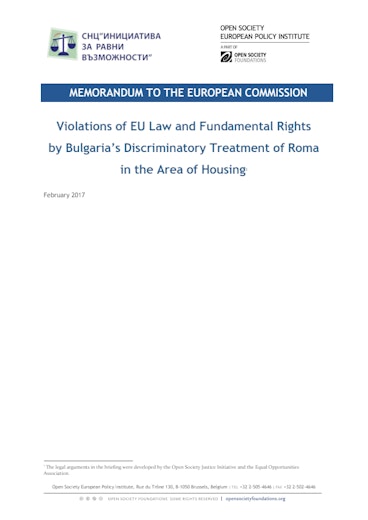 In this memorandum to the European Commission, the Equal Opportunities Initiative Association (EOIA) sets out evidence that Bulgarian government bodies discriminate on grounds of Roma ethnicity in the area of housing rights and that Bulgaria has failed to transpose and implement the European Union’s Race Equality Directive 2000/43/EC. The memorandum:

In light of the new evidence set out in this memorandum and that of the other national and international monitoring bodies, and the lack of adequate and effective response by the Bulgarian authorities, EOIA, Open Society Justice Initiative and the Open Society European Policy Institute consider the time has come for the European Commission to begin infringement proceedings against the Bulgarian government under Article 258 of the Treaty on the Functioning of the European Union.