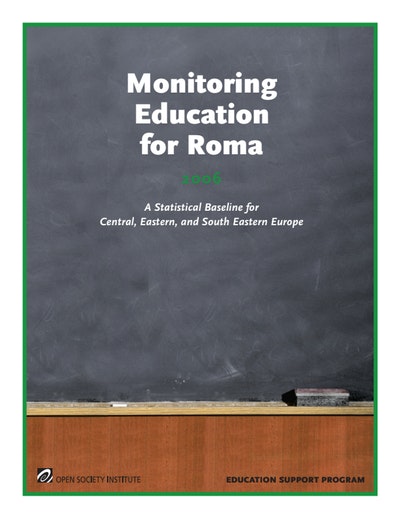 There is a fundamental lack of accurate information on Roma in Central, Eastern, and South Eastern Europe. The official census data that does exist in these countries consistently underestimates the size of the Roma population and provides inadequate information about Roma participation in all spheres of life.

This failure has far-reaching consequences: the lack of information renders policy and planning ineffective and makes it impossible to monitor changes. Inadequate data also perpetuates vast disparities in access to quality education. Inadequate information will continue to enable governments to evade responsibility for failing to create, fund, and implement effective programs for Roma integration. What is known for sure, however, is that only a tiny minority of Roma children ever complete school and the education to which they do have access is typically vastly inferior.

In response to this situation and in the interests of promoting education justice for Roma, the Open Society Institute presents here the best available data on Roma education in Central, Eastern, and South Eastern Europe. Collating information from 19 countries, Monitoring Education for Roma: A Statistical Baseline for Central, Eastern, and South Eastern Europe provides the clearest, most accurate image yet of Roma participation across a broad range of key education indicators, including enrollment and completion in primary, secondary, and tertiary education.

The report demonstrates just how far behind the Roma are in the area of education. Majority populations have much better enrollment and completion rates, as the following examples attest:

Significant efforts are necessary to develop better data and statistics for Roma over a range of priority issues, starting with more reliable and realistic population figures. The Open Society Foundations by no means suggests that governments resort to compulsory racial, ethnic, or religious profiling in school admissions or in any other situations. However the provision of reasonably accurate information on education for Roma, and other minority communities, is the responsibility of government, primarily through central statistical services. The report calls for governments in Central, Eastern, and South Eastern Europe to collaborate effectively with Roma and other minority communities to develop effective ways to research and provide this information on a regular and systematic basis.

Monitoring Education for Roma is available for download in PDF format.