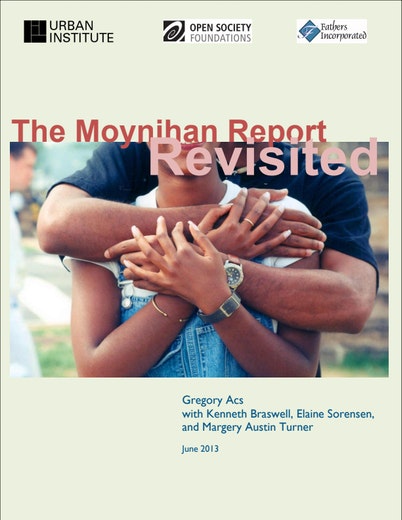 Few pieces of social science research have stirred as much controversy or had as great an impact as 1965’s The Negro Family: The Case for National Action. The U.S. Department of Labor report, more commonly referred to as the Moynihan report after its author, Daniel Patrick Moynihan, focused on the deep roots of black poverty in the United States.

Moynihan argued that the decline of the black nuclear family would significantly impede blacks’ progress toward economic and social equality. Over the ensuing decades, the report has been hailed by some as prophetic and derided by others as a classic example of blaming the victim. To this day, scholars and advocates concerned about poverty and economic opportunity continue to revisit the issues raised in the Moynihan report.

This report revisits Moynihan’s analysis and examines the state of black families today, some five decades after Moynihan’s work. In addition to gauging how the circumstances of black families have changed over time, it compares them with other racial and ethnic groups.

Although social progress has opened the doors of opportunity to many talented members of the black community, large socioeconomic gaps between blacks and whites remain. Black poverty rates and unemployment rates are considerably higher than those of whites, and black children are more likely than white children to reside in single-parent households. Indeed, the high rates of single parenting that Moynihan identified in the 1960s have only grown higher since, but they have done so for all racial and ethnic groups.

A History of Presidential Lies

While U.S. President Donald Trump is known for lying, a new book from the journalist Eric Alterman argues that he is far from the first president to do so—and raises questions about the relationship between executive power and “alternative facts.”

A $220 Million Investment in Racial Justice

For decades, George Soros and the Open Society Foundations have invested in racial equity and the movement to dismantle systemic forms of discrimination—from the drug war to segregated schools and housing to securing the right to vote.