Muslims in France: “The Future Is Open” 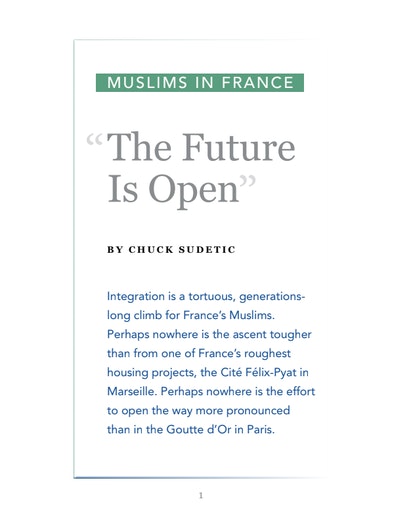 The heated debate in France about national and individual identity, fanned by political rhetoric, is far from over. Muslims, as the central topic of this debate, are more often talked about than heard. In Muslims in France: “The Future Is Open,” Chuck Sudetic helps rectify the imbalance by telling the stories of some of France’s most controversial citizens. The people he interviewed describe  the highs, lows, and everyday realities of life for Muslims in Paris and Marseille.

At Home in Europe, an Open Society Foundations project, examines the position of minorities and marginalized groups in a changing Europe. Currently the project is studying Muslim inclusion in 11 cities across Europe, including two French cities, Paris and Marseille. In Marseille, where people of Muslim background account for about 20 percent of the city’s 4.7 million people, a mixed picture emerges about the local and national identities of Muslims. There are also success stories like Med’in Marseille, a website set up in 2007 which has been instrumental in tackling stereotypes and placing immigrant populations at the heart of local citizenship.