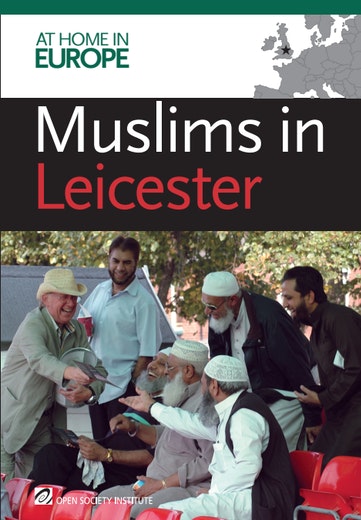 "Yes I am new compared to others. But I feel that I have lived in Leicester forever. I would define myself as European, Somali, Muslim—you know a lot of definitions. In Leicester, no matter your background, whether you are black, or white, or Asian, or Christian, or Sikh, people have respect for you."

These words were spoken by one of the 300 residents who participated in Muslims in Leicester—a groundbreaking study on the social inclusion of Muslims produced by the Open Society At Home in Europe Project.

Muslims in Leicester is the first of 11 city reports to be produced this year as a result of research undertaken on the level and nature of integration of Muslims in eleven cities across Europe (Antwerp, Amsterdam, Berlin, Copenhagen, Hamburg, Leicester, London, Marseille, Paris, Rotterdam, and Stockholm).

Through engagement with policymakers and communities, the research examines the political, social, and economic participation of Muslim communities living in the city of Leicester (United Kingdom), a thriving and diverse city which is predicted to become Europe's first plural city, where there is no ethnic majority group.

The Muslims in Leicester report focuses on three of Leicester's 22 wards: Evington, Stoneygate, and Spinney Hills. The report outlines and examines the experiences of Muslims living in these neighborhoods in the areas of education, employment, health, housing and social protection, citizenship and political participation, policing and security, media, belonging, identity and interactions. It offers a series of recommendations for local and national authorities and organizations. Leicester gives strong examples of how ethnic and cultural diversity is managed well and, in fact, turned into an asset for cities.

Research for this report was conducted by the Policy Research Centre.

The publication is available for download. A fact sheet based on the report's findings is also available.

Hard copies of the report can be requested but please note that they may not always be available. To request one, please contact Csilla Tóth at cstoth@osi.hu.