Muslims in the UK: Policies for Engaged Citizens 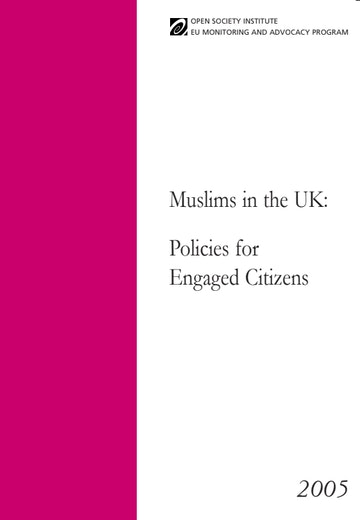 Greater government recognition of the needs of British Muslims is required to tackle the disadvantage, deprivation, and discrimination that this community faces, says the OSI report Muslims in the UK: Policies for Engaged Citizens.

Presenting new analysis and data, the report, published by OSI's EU Monitoring and Advocacy Program, makes the case that religion is a more important aspect of identity than ethnicity for British Muslims. Currently both data collection and government policy too often address minority issues only through the lens of ethnicity. Muslims in the UK makes detailed, practical recommendations aimed at seeing that government policy more effectively meets the needs of Muslims as a group.

The chapter on employment highlights the disproportionately high rate of unemployment among UK Muslims and the over-concentration of Muslims in low-paying sectors. It also finds that Muslim women recorded the highest level of economic inactivity among all faith groups and that Muslim youth are at increasing risk of social exclusion.

Muslims in the UK reveals low levels of confidence in the criminal justice system prevalent among British Muslims, and the impact of anti-terrorism laws in fueling a perception of unfair treatment. Key educational concerns for Muslim parents include their children's poor (although improving) academic results; the need to eradicate racism and Islamophobia; and the lack of recognition or support of their children’s religious identity.

The report makes the following recommendations:

Muslims in the UK: Policies for Engaged Citizens is available for download in PDF format.