New Political Actors in Europe: Beppe Grillo and the M5S 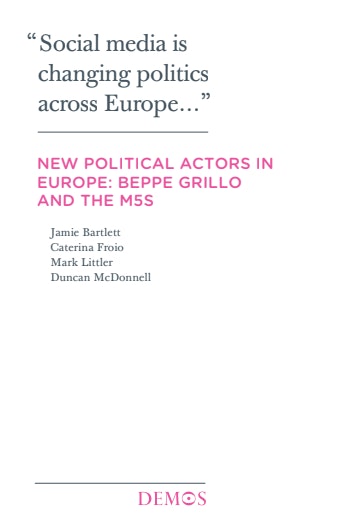 New social and political movements from radically different political positions are emerging across Europe using social media, posing a new challenge to existing political parties and structures. The Pirate Party in Germany and the Occupy movement are examples of movements that have employed social media to grow rapidly and create a significant political and social impact, all in the last three years.

Beppe Grillo, the Italian comedian and blogger, is one of the first political figures to have embraced this change. He has used social media to communicate, recruit and organize, growing the Moviment 5 Stelle from practically nothing to a major political force in Italy in the space of three years, with it expected to play a crucial role in the 2013 Italian elections. His anti-establishment message has resonated with many against a backdrop of declining trust in political institutions, falling political party membership and ever-lower voter turnout.

This report presents the results of a survey of 1,865 Facebook fans of Beppe Grillo and the Movimento 5 Stelle. It includes data on who they are, what they think, and what motivates them to shift from virtual to real-world activism. It also compares them with other similar parties in Western Europe and their attitudes to those of the Italian population. This report is the seventh in a series of country specific briefings about the online support of populist parties across Europe.