The New Politics of Judicial Elections 2004 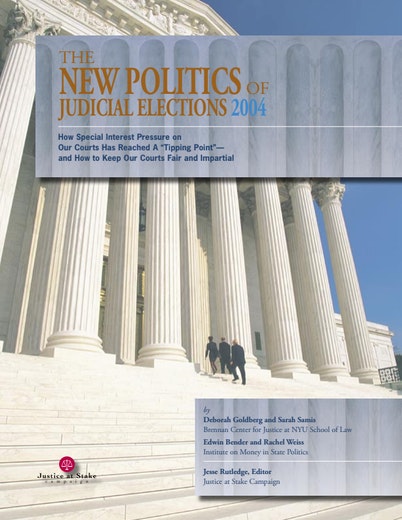 A perfect storm of hardball TV ads, millions in campaign contributions, and bare-knuckled special interest politics is descending on a rapidly growing number of Supreme Court campaigns, according to a major new report from Open Society Foundations grantee Justice at Stake Campaign and its partners, the Brennan Center for Justice at NYU School of Law and the Institute for Money in State Politics.

The report comes on the third anniversary of a U.S. Supreme Court decision that gave interest groups more tools to pressure judicial candidates to rule on their behalf. Thirty-eight states elect their high courts, and more than 86 percent of state judges must stand for election.

Amid growing speculation over a near-term vacancy on the U.S. Supreme Court, and with interest groups posturing for a confirmation battle involving millions of dollars in television advertising and grassroots battles, this new report shows that many Americans are already seeing high-stakes court battles in their own backyards.

Among the key findings of the report:

The report also offers good news. In a number of states, far-sighted citizens, judges, legislators, and bar leaders are banding together as never before to address the threat and reform their judicial selection systems.

The complete report and a press release are available for download in PDF format.